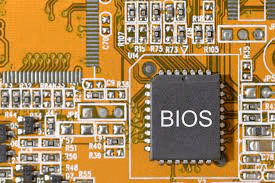 The BIOS, or Basic Input Output System, is software that is stored on a tiny storage system-on-chip. BIOS is in charge of the POST, making it the first piece of software to run when a computer boots up.

The BIOS firmware is non-volatile, which means that its settings are preserved and recoverable even after the device is turned off.

Gary Kildall, an American computer scientist, created the word BIOS in 1975. It was included in IBM's first desktop PC in 1981 and rose to prominence in subsequent PCs, becoming a fundamental feature of machines for some time. However, the popularity of BIOS has declined in favor of a newer technology known as Unified Extensible Firmware Interface (UEFI) (UEFI). In 2017, Intel revealed a plan to phase down support for outdated BIOS systems by 2020, substituting them with UEFI.

How to Get to BIOS?

Unlike an operating system such as Windows, which is frequently downloaded or received on a disc and must be installed by the user or manufacturer, BIOS is installed at the time the computer is produced.

Depending on the make and model of your computer or motherboard, you may access the BIOS Setup Utility in a variety of ways.

BIOS software is found on all current computer motherboards.

Because the BIOS is part of the motherboard hardware, BIOS access, and settings on PC systems are agnostic of any software. It makes no difference if a system is running Windows 10, Windows 8, Windows 7, Windows Vista, Windows XP, Linux, Unix, or no operating system at all-BIOS operates independently of the operating system and is not dependent on it.

The primary function of BIOS is to act as a bridge between operating systems and the hardware on which they operate. BIOS is always the theoretical intermediate between CPU and I/O device control information and data flow. Although, in certain circumstances, BIOS can configure data to flow straight to RAM from devices that require quicker data flow to function properly, such as video cards.

How does BIOS operate?

BIOS is bundled with computers as firmware on a motherboard chip. In contrast, an operating system such as Windows or iOS can be pre-loaded by the seller or downloaded by the user. BIOS is software that is stored on an erasable programmable read-only memory (EPROM) chip that is available to the CPU. When a user turns on their computer, the CPU transfers control to the BIOS software, which is always stored in the same location on EPROM.

When BIOS powers up a computer, it first checks to see if all of the required attachments are present and active. A boot device is any piece of hardware that contains files that the machine requires to function.

After verifying and confirming that boot devices are operational, BIOS loads the operating system (OS) or critical components of it into the computer's random access memory (RAM) from a hard disk or floppy drive (the boot device).

The four functions of BIOS

Soon after a computer is powered on, it identifies, configures, tests, and links computer hardware to the OS. The boot process is the combination of these phases.

BIOS' four key functions do each of these tasks:

Check what version of BIOS is presently installed on your machine before updating it.

One solution is to utilize a "boot lock" component of the BIOS software that gets updated separately from the rest so that if corruption occurs, a recovery procedure avoids harm.

The BIOS in some of the original IBM computers was not interactive, as it is today, but instead functioned to show error warnings or beep signals. Instead, any unique settings were created by altering physical switches and jumpers.

How to enter into BIOS mode on Windows >>