HDD Vs. SSD: What Are the Differences

When deciding between an HDD and an SDD, many consumers are confused. Given that each option has its own set of advantages and disadvantages, there is no one best solution. The decision should be based on user preferences, requirements, and resources. 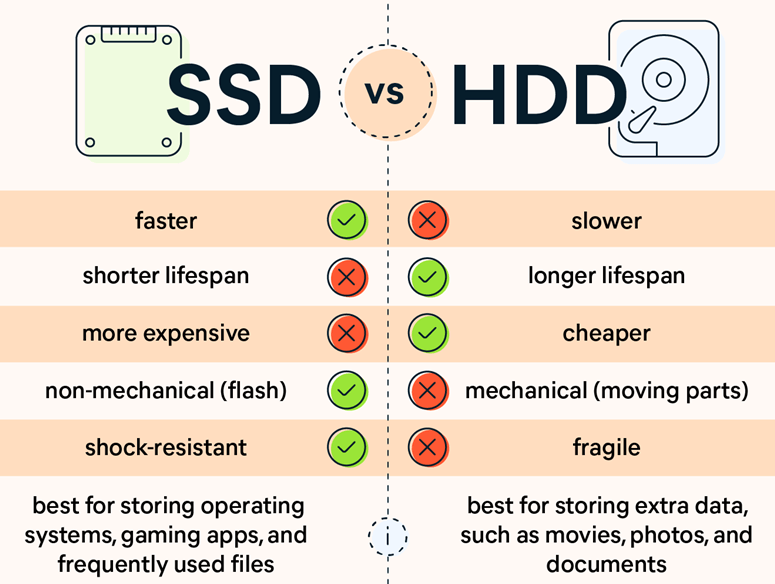 If you're unsure whether to invest in an HDD or an SSD, you've found the ideal resource. In order to assist you in deciding between a standard hard disk (HDD) and a solid-state drive (SSD), we have compiled a comparison of their respective features and benefits in our SSD versus HDD guide.

What Is A Hard Disk Drive?

With the use of magnetism, data may be stored on a constantly spinning platter inside a hard disk drive. For reading and writing, it employs a read/write head that hovers above the rotating platter.

In HDDs, speed is directly proportional to the platter's rotational speed. HDDs additionally have an I/O controller and software, which serve to direct the hardware and facilitate communication across the system.

Hard disk drives are sometimes less costly than solid-state drives of the same capacity, and they have the added advantage of being a tried-and-true technology. Storage capacities of HDDs now available are greater than those of SSDs.

HDDs have disadvantages because of the mechanical elements needed to read and write data, which makes searching and retrieving data more time-consuming than it would be with an SSD. Mechanical components are sensitive and might skip or fail if dropped or handled forcefully.

This is an issue with laptops but less so with desktops. HDDs are bulkier and more power-hungry than equivalent SSDs.

What Is A Solid State Drive?

The data on a solid-state drive (SSD) is stored and retrieved nonstop because it uses flash memory rather than volatile memory. Instead of using platters to store data, however, these devices rely on flash memory chips that are coupled to one another. In comparison to HDD, its performance is superior.

A solid-state drive (SSD) has several advantages. The loading times of video games, software, and media are all improved with SSDs. SSDs are less bulky and more durable than traditional hard drives, thanks to their cutting-edge technology.

The Crucial P5, for instance, has incredible read/write speeds of up to 3400/3000MB/s, making it our fastest NVMe SSD. In comparison to portable HDDs, SSDs are much speedier. The X8, which can store up to 2TB of data and has a read speed of up to 1050MB/s1, is up to 100 times quicker than USB flash drives2 and up to 7.5 times faster than regular hard drives2.

SSDs are more costly than HDDs because they use more recent technology. Large capacity solid-state drives are becoming more readily available, yet they still lag behind their mechanical counterparts. HDDs are up to 2.5 times bigger.

HDD: To put it simply, HDDs are really sluggish. HDD is inferior to SSD in terms of latency, read/write speeds, and IOPs (input/output operations per second).

HDD: Hard disk drives produce heat and noise when the platters revolve at a higher rate of power usage. 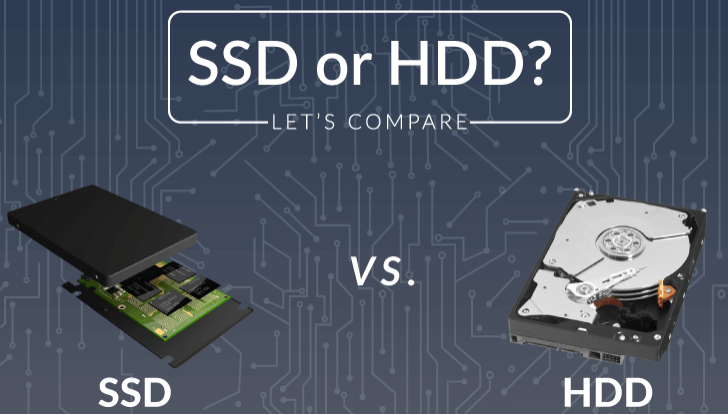 SSD: Fragmentation has little effect on the performance of solid-state drives. In this case, defragmentation is unnecessary.

HDD: When compared to solid-state drives (SSDs), HDDs are much heavier.

HDD: Because of their mechanical design, hard disk drives (HDDs) are fragile and easily damaged by drops and vibration.

SSD: Solid-state drives (SSDs) can endure vibrations up to 2000 Hz, much higher than those experienced by hard disk drives (HDDs).

Let's compare SSDs vs. HDDs so you can make an informed decision about which one to buy. Solid-state drives (SSDs) are superior in many ways, including speed, durability, size, noise, and energy efficiency.

In the case of damage, HDDs may also allow for quicker data recovery at a lower cost. Assuming cost is not a concern, solid-state drives (SSDs) are preferable to hard disk drives (HDDs), and current SSDs are almost as dependable.

HDDs are now preferred only for storing massive volumes of data that won't be accessed often. However, upgrading to an SSD will give you far better speed and make your computer run much faster if you can afford it.