How Does A Computer Boot for Work?

A computer system must have a functioning BIOS, operating system, and hardware components in order to boot. A failed boot sequence results from the failure of any one of these components.

Because they lack the fundamental computer starting and operating expertise, Windows/Mac users who encounter problems are quick to employ the incorrect solutions, which is considered to result in far worse problems.

So, it is clear that mastering the fundamental concepts of how a computer operates is crucial.

How does a computer typically operate?

POST (power-on-self-test), system boot, kernel boot, and system initialization are the steps used to start a computer. Once the computer is running, it will operate using a combination of hardware, software, and an algorithm (binary/hexadecimal).

Here are the steps that make up a system boot process, as shown in the figure below: − After the computer's power is turned on for the first time, the CPU initializes itself. This is accomplished by causing the system clock to produce a string of clock ticks. 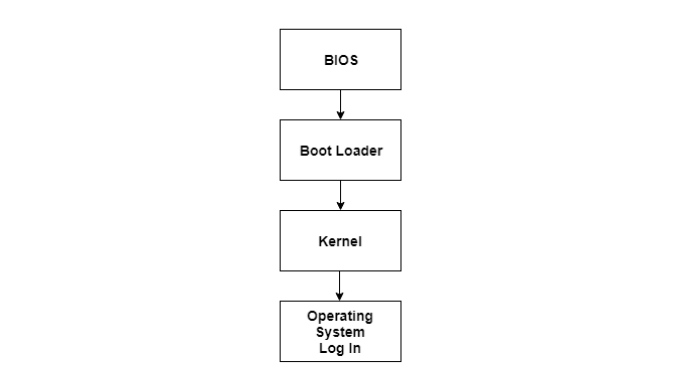 In order to receive the first instruction in the start-up program, the CPU then searches for the system's ROM BIOS. This initial instruction directs the machine to conduct POST (Power On Self Test) at a preset memory location and is stored in the ROM BIOS.

POST initially verifies the CMOS RAM, then the BIOS chip. POST will continue to initialize the CPU if it finds no battery failure.

POST also examines the computer's hardware, including the mouse, keyboard, secondary storage devices like hard drives, ports, etc., and other hardware. To ensure sure they are operating correctly, this is done.

The BIOS then looks for an operating system to load after POST verifies that all the components are functioning as they should.

The boot sequence refers to the arrangement of the several disks that the CMOS examines before locating the operating system. The CMOS configuration can be altered to alter this sequence.

The BIOS initially locates the boot record, which instructs it to discover the start of the operating system, after determining the proper boot disk.

The operating system then does a final memory inventory and loads the device drivers required to manage the peripheral devices.

Users can utilize the system programs to accomplish a variety of activities.

Computer users would have to download every piece of software, including the ones that are rarely used, if the system boot procedure didn't exist. Only the software components that are really required must be downloaded when the system boots; all other components are not necessary.

What is the POST and what purpose does it serve?

Each hardware component receives a unique POST code from the BIOS manufacturers, as well as a unique alarm tone. The device's POST code will be written into the 80H diagnostic port before the hardware is evaluated. The test procedure will be ended with the settling alarm sound on if the test subject passes; otherwise, it will move on to the next one. The alarm sound indicates the location of the defect.

The UEFI booting mechanism is taking over for the BIOS booting system in the future.

It still uses 16-bit technology, which is outdated and has a poor exploitation efficiency. It doesn't support addressing boot if the destination location is larger than 2TB and only has a 1MB address space.

Its limited extensibility results from its obstinate code, which has not changed in all those years.

When the executable code executes, security is not taken into account.

It can't reliably carry out the fundamental input and output operations and wastes a lot of time and money.