The device the computer loads its operating system from is controlled by the BIOS's boot (start-up, power-on) order. Change the boot order to make the computer boot from a USB drive, CD or DVD drive, or another hard drive.

The entire procedure of setting up an SSD disk, moving Windows OS to a new SSD, placing an SSD as the boot drive in Windows 11/10/8/7, etc., is discussed in detail on this page. Learn how to successfully install Windows on your new SSD by reading on.

What is a boot drive?

The drive that houses the operating system, commonly known as the system drive, is the boot drive. To start, the machine must be booted by either BIOS or UEFI. A program called BIOS/UEFI is installed on the motherboard's ROM chip. It keeps the computer's most crucial primary input and output applications, the self-check software that runs when the device is turned on, and the system self-start program.

We typically store the operating system on HDD. The HDD serves as the boot drive at the moment. But because SSDs perform better, some consumers might switch from HDDs to them. You must designate the SSD as the boot disk after reinstalling the SSD. Because the BIOS and UEFI load first when the machine starts up and instruct it on which drive to launch Windows, change the new drive's boot order to first if you are starting from one.

How to change the boot drive from BIOS?

After realizing the need to alter the boot drive. I'll then demonstrate how to change the boot drive on Windows 10, 11, and later. This approach is practical for ASUS, Dell, MSI, and Samsung. You can use the steps below as a guide:

Start the computer, and when the screen shows, follow the instructions to enter the BIOS or UEFI settings (often DEL, ESC, F1, F2, F8, F9, F10, F11, F12). You will then see two separate user interfaces:

Press the arrow key on your keyboard to access the "Boot" tab in the BIOS menu. Change the boot order settings to make the new boot drive the first boot device. To save the changes you made to the boot order, follow the instructions in the BIOS utility to travel to the "Exit" page and select the "Exit Saving Changes" option.

You can use the mouse to click the new hard drive that needs boot priority directly from the UEFI menu. Then adhere to the exit and save instructions.

How to change the boot drive to SSD on Windows?

Solid-state drives, often known as SSDs, are becoming increasingly popular because of their faster reading and writing speeds and improved stability. However, SSD typically has a lower storage capacity than a standard HDD. Combining a speedier SSD and a larger HDD is an excellent alternative for a Windows PC to attain high performance.

Typically, individuals would choose an HDD with a bigger capacity to store their data, files, and apps and an SSD to serve as the boot drive. To do that, you must move the Windows operating system from an HDD to an SSD, after which the SSD must be designated as the boot drive.

Please read and adhere to the instructions to make your SSD bootable on Windows 11/10/8/7, etc., without any problems. Even newcomers can complete it.

Getting started requires first getting your SSD ready. There are a few tasks that must be completed first, whether it is a new or old disk.

Remove the computer case using the screwdriver, then attach the SSD to the PC properly using the connecting cords.

Restart the computer and enter the BIOS by pressing F2, F8, F11, or DEL. Go to Setup, activate or turn on the SSD, save your adjustments and leave. After that, you should be able to view the disc in Disk Management when you restart the computer.

If you need to install Windows from scratch, click this link for a thorough tutorial: Set up Windows 10 on an SSD. To convert your present Windows OS to SSD, follow the instructions in the following guide.

You can manually copy the operating system to a fresh SSD or get assistance from a magic disk cloning program.

Step 2. Move to the next step to preview the layout. Then clone the Windows OS to the SSD. 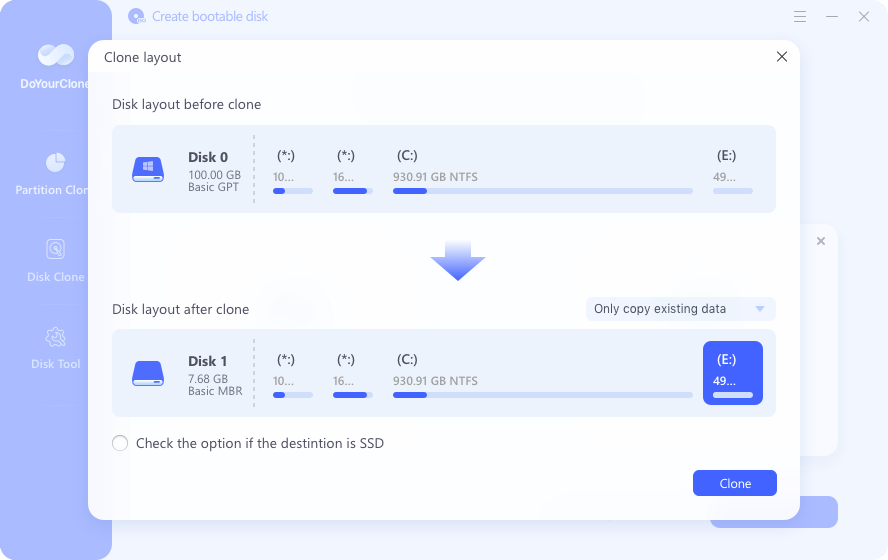 Keep in mind that it's not over yet. You still have one more action to perform after the OS migration. It is to switch Windows 11/10's boot drive from the old disk to the new SSD. The following section has a full explanation of each step.

Step 1. Restart your computer and press Del to access the BIOS.

Step 2. Change the boot order in the boot option and set the OS to start from the new SSD.

Step 3. Save the modifications, quit the BIOS, and restart the computer.

Let the computer start up slowly. You can now successfully use the new SSD as your operating system disk.